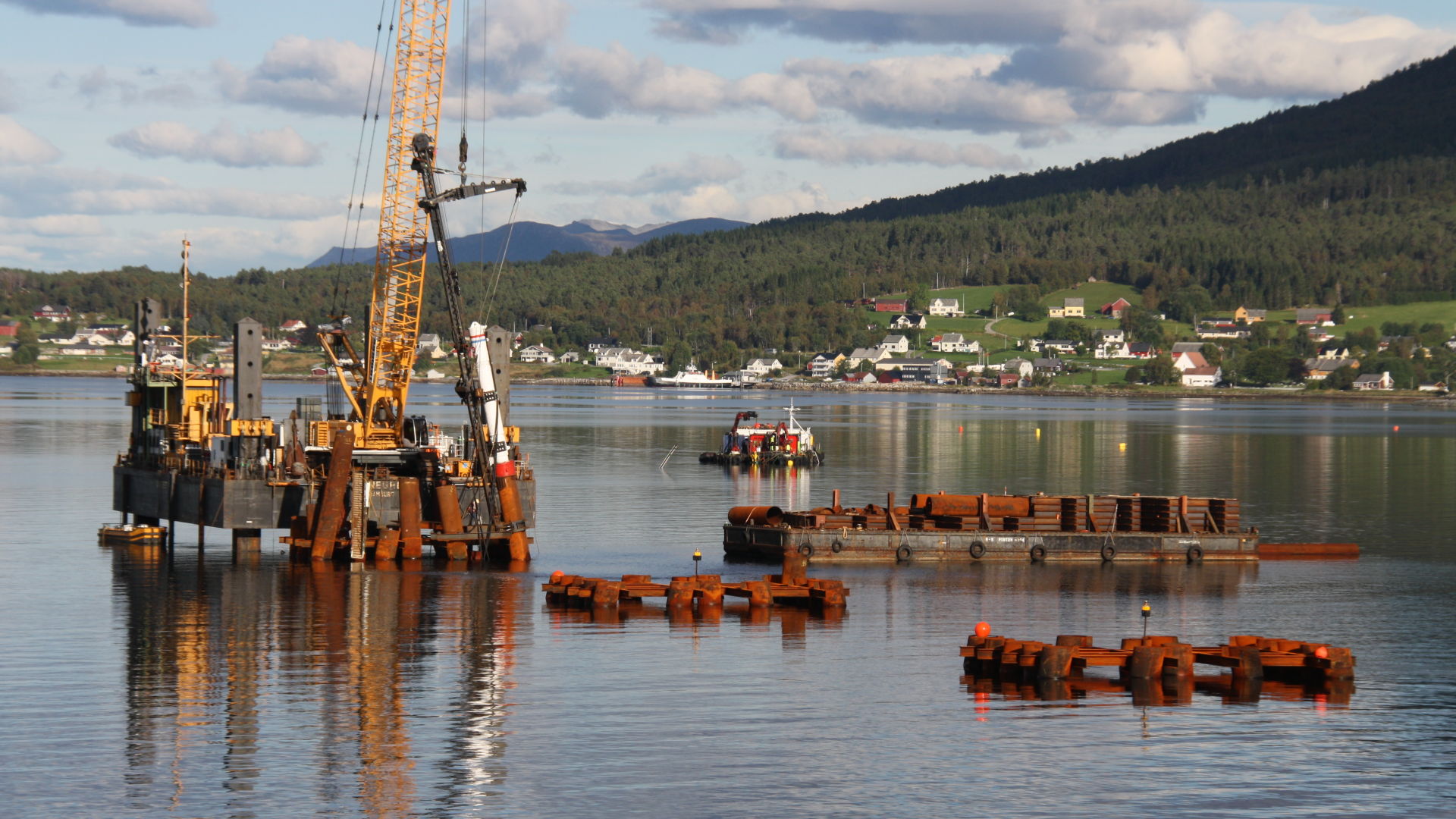 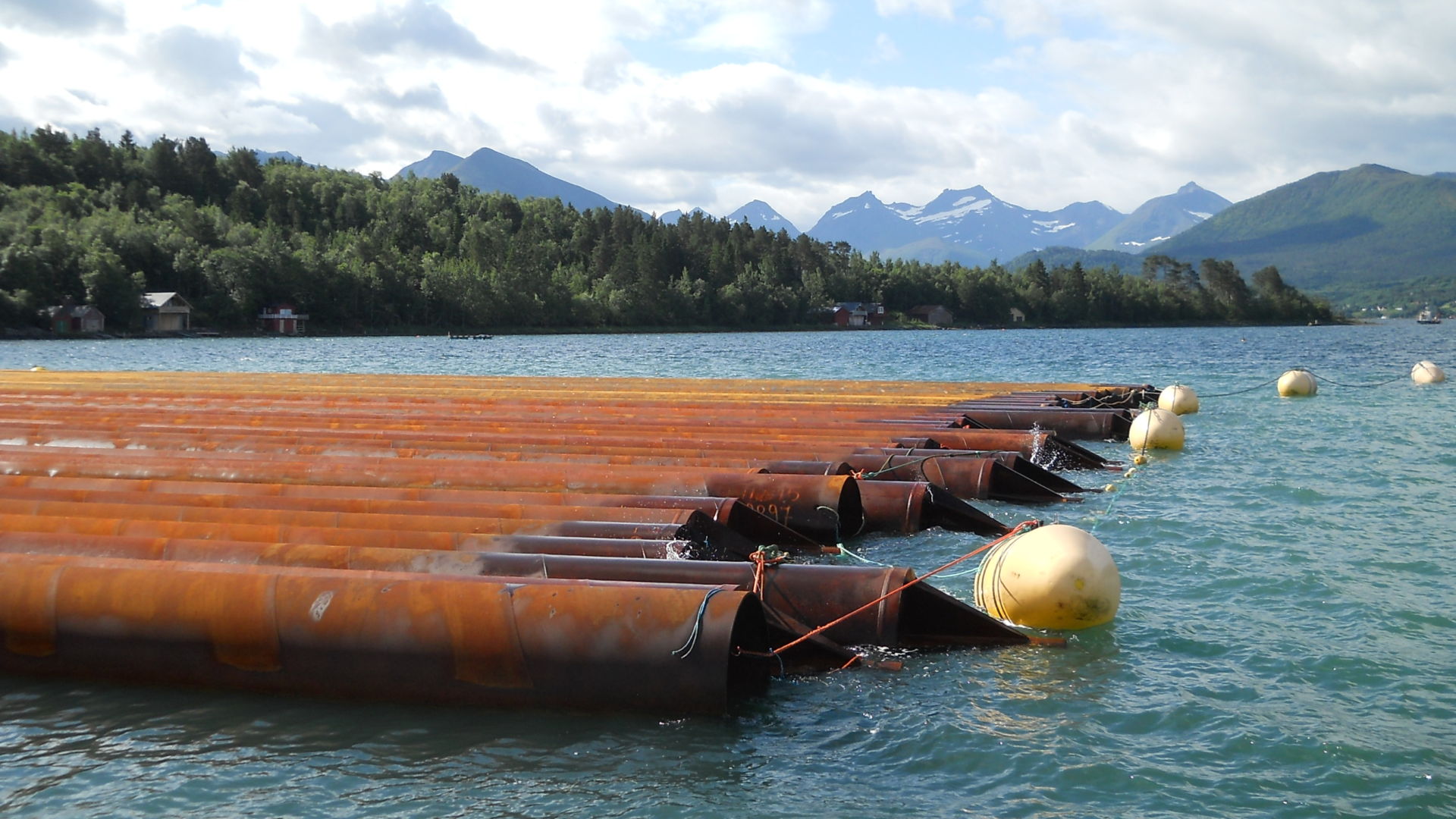 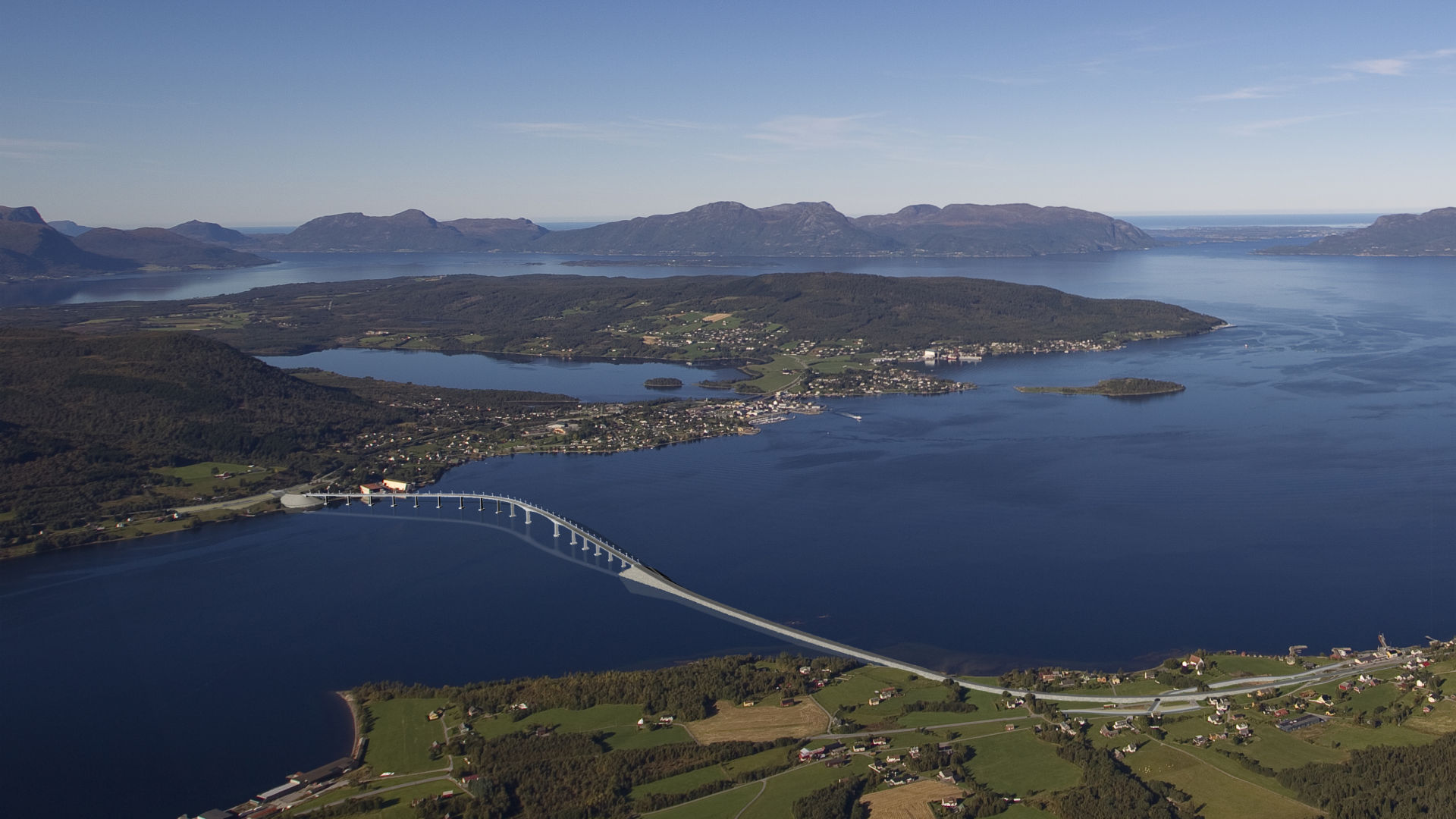 Tresfjord is a North Sea fjord, located in Norway's Møre og Romsdal county. The E136 motorway, the main traffic artery between Åndalsnes and Ålesund, goes all the way around this fjord in an accident charged stretch of 18 km with about 200 driveways. A re-routing of the E136 by crossing the fjord with a 1,290 meter bridge plus a nearly 750 meter long dam will make the motorway safer and shorten the travel time by approximately 20 minutes.

A particular challenge of this project lay in the foundation works - after all, the North Sea is up to 40 meters deep here. 13 bridge pillars rest on foundations of concrete-filled steel pipe piles, totalling 8,744 meters in length.

The bottom of the fjord consists of solid rock with a very hard moraine layer on top of it, containing sand, gravel and stones plus a third layer of softer sediments with a varying thickness from 0 to 4 m. Based on a series of piling tests, Ø1220 x 18mm piles were selected. The dynamic load capacity for the design was set to 9600kN, slightly below the measured values to allow for some variation in soil conditions along the bridge.

To shield the bottom end of the piles from heavy impacts on the moraine or bedrock during the driving process, rock shoes were welded to the pipe ends. The rock shoes distribute the loads evenly over the cross-section of the pile and prevent the lateral sliding of the pile end over the bedrock.

Each of the 13 bridge pillars founded on tubular piles consists of 12 to 18 steel pipe piles with lengths of 28 to 58 m. Most piles have an inclination of 1:5 in order to transform horizontal forces from the bridge to the bottom of the fjord. The piles were installed from a jack-up rig, with a IHC 200 Hydrohammer, guided by a special inclined leader. Per pillar, a minimum of two piles was monitored with Pile Driving Analysers (PDA) during installation.

Due to a lack of stocking area for the pipes, they were sealed at both ends so they could float in the fjord. The hollow dowel of the rock shoes was filled with expanding grout. The upper end of the pipes was sealed with welded cover plates. The piles could be moved easily with a tugboat. Before installation, sea water was pumped into the pipes to bring them in the right position for driving.

ArcelorMittal produced the 198 spirally welded tubes in its Spiral Mill in The Netherlands. The piles, with the sealed rock shoes and the cover plates attached, were shipped to Vestnes together with 773 tons of prefabricated rebar cages. Availability of stock coils, which allowed rapid commencement of manufacturing by ArcelorMittal Projects Europe together with expeditious logistics was leading in the successful completion of the bridge pillars.

The project started in October 2012 and will be completed in autumn 2015.